Even in general competitions, any action which could damage the neck joint or spine will draw a “Keikoku” Warning or “Hansoku-make” Defeat by grave infringement or accumulated light penaltiesdue to the risk of serious injury.

Primary school students are prohibited from using any of the Suime waza Joint locks and Shime waza Strangling techniques. This Waza is therefore prohibited in junior competitions due to safety concerns, given that most of these competitions use an “open weight division” format.

Using this Waza will result in an immediate Hansoku-make Defeat by grave infringement or accumulated light penalties. Certain Shime waza Strangling techniquesand the Sankaku-jime Triangular strangle in particular, are therefore prohibited due to the risk of neck injury.

Performing this action will draw a “Chui” Light penalty or higher penalty. In this Waza, Tori grasps both the opponent’s arms or torso with both hands and applies his own body weight to Uke as he topples him.

Wrapping an arm around the opponent’s neck increases that force even more, posing a safety hazard that could cause serious damage. Because their bodies are not yet fully formed, junior contestants are particularly vulnerable to Waza which are applied wazz the joints. 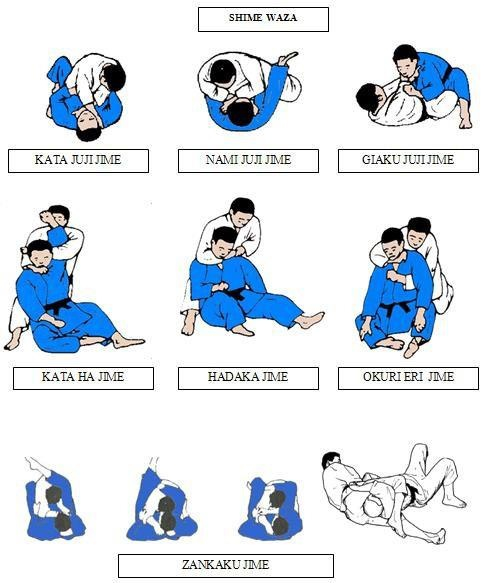 Hansoku-make Defeat by grave infringement or accumulated light penalties This Waza throws the opponent down in a backward posture, and is also shkme in general competitions. Actions which could damage the neck joint and spine when performing a Katame waza Grappling techniquesetc Such actions present serious safety hazards, and a contestant who engages in them will draw a “Chui” Light penalty or higher penalty.